Ever wonder why your camera may take a photo differently than someone else’s? You were standing in the same spot, focusing on the same thing, but your photo looks vastly different when you start to examine it closer.

There are a huge number of articles that break down why this happens in very technical terms. But the problem in reading them is their technicality. I wanted to understand the physical phenomenon of why appearances change from camera to camera, using real world photos.

In a real world scenario there would be a landscape vista point. At that vista point (imagine a classic vista like Horseshoe Bend) nearly every photograph taken is roughly of the same scene, roughly the same field of view, and nearly every photographer is limited to being in roughly the same spot, neither closer nor further away than any photographer that came before. With these limitations we can agree that some landscape vista points all share roughly the same looking photo. Which is why we see many pictures of Horseshoe Bend, Zabriskie Point, McWay Falls and others, looking very similar. There’s nothing wrong with that! As a photography instructor, it’s my job to take people to these iconic vistas and help them to create an image like the thousands that have come before.

Why Does Your Photo Look Different from Someone Else’s Given the Same Settings?

The answer lies in your camera’s sensor size. Technical details aside, images from different-sized imaging sensors can appear radically different even when using the same settings, effective focal lengths, and similar distances from camera to subject.

This study is going to assume the following:

The reasons why we are assuming these factors is to get the same looking photo, just as any hobbyist, amateur, or professional would when presented with the same vista. We all want the same photo – kind of like hunting or collecting trophies. If you disagree with that premise, I welcome you to visit Mesa Arch at sunrise or Manhattanhenge at sunset.

So let’s get slightly technical now. The two main types of DSLRs most people use these days fall into two categories: crop sensor (APS-C) and full frame (sometimes referred to as 35mm). I shoot with Canon, so I conducted a comparison between a Canon 5D Mark III (full frame) and a Canon 7D Mark II (1.6x Crop).

The crop factor number we have all come to know about describes the focal length multiplier one must use to compare the field of view of a smaller sensor against a full frame sensor. So In practice, to get an idea of what focal length your 18mm lens would look like on a crop sensor camera, you would multiply 18mm x 1.6 to get about 29mm. In other words, if you put an 18mm lens on a crop sensor camera, it would look as though you were using a 29mm lens on a full frame.

Notice how the APS-C box looks like a “crop in” from the full frame. The full frame photo was shot at 17mm. If we multiply 17mm by the crop factor of 1.6 (or 1.5 in the case of Nikon or Sony), we get 27.2, or the equivalent focal length of a crop sensor camera with the same lens set to 17mm. Since the sensor is smaller, it only picks up a cropped field of view.

So let’s say your buddy shot a great image with his Canon 60D and was using a focal length of 55mm. If you have a Nikon D800 and you want the same shot from the same vantage point, you’ll need to do some math (55mm x 1.5 = 82.5mm). You’ll need to shoot at around 82mm from his vantage point to get an equivalent shot.

And there you have it. That’s how you use the crop factor to determine the apparent field of view between larger and smaller sensor sizes. The confusing thing about this is that most lenses in digital photography are produced with focal length numbers indicating what they would look like mounted on a full frame camera. So that 18-55mm kit lens that came with your Canon or Nikon APS-C camera isn’t really going to look like an 18-55mm. It’s actually going to look like a 30-90mm. A little deceiving, no?

Effective/equivalent focal length is only one issue when comparing full frame to crop sensor. The other, more confusing, issue is comparing relative depth of field between sensor sizes.

So what happens when you use the same effective focal length, the same camera position, and the same aperture value between different sensor sizes? Let’s take a look:

Not much difference, it seems.

But when you zoom in a little further:

Conclusion? You can also effectively use the crop factor multiplier on an aperture value to adjust the apparent depth of field relationship between crop and full frame sensors. It’s exactly like using the multiplier to find the effective focal length, you simply switch the values. If I shoot a scene with a full frame camera at f/2.8 and 31mm, then to get the exact same photo with a crop sensor I would need to:

So to get the exact same looking shot of the full frame camera with a crop sensor I would need a focal length of 19mm and an aperture of f/1.8. Which isn’t possible on that lens!

So what does this all mean? For the purposes of this test, assuming you wanted to replicate a photo by standing in a similar spot as another photographer, a small sensor camera will have both an increased depth of field and a tighter field of view – relative to a full frame camera. So to get similar results you would use the crop factor multiplier on both the focal length and the aperture.

You can apply this method across the board with cameras using a myriad of different sensor types. One of the biggest misnomers in the industry is when camera manufacturers sell lenses using the word “equivalent” to describe how their lenses perform. Let’s pick on Micro Four Thirds (MFT) for second.

Leica has an MFT point and shoot called the D-LUX (Typ 109) that comes with a non-removable 10.9-34mm f/1.7-2.8 lens. Sounds great on paper, right? But that’s not the whole story. Now in the sales sheet and specs it lists an equivalent focal length of 24-75mm. So again, on paper, a 24-75mm lens with a variable aperture of f/1.7-2.8. It sounds fabulous! Canon, Nikon, and Sony all sell 24-70mm f/2.8 lenses at well over $1500. But the Leica is just $1100! You cannot use the word “equivalent” in describing just the focal length, it’s a bit misleading. To get the full picture of how the lens on this camera performs when compared to a full frame, we must use the crop factor multiplier on both the focal length and aperture. When you do the math this lens performs like a 24-75mm f/3.4-5.6. Doesn’t sound as great now.

Even products with smaller sensors aren’t immune. The iPhone 6 has a 4.15mm f/2.2 fixed aperture lens. Its sensor has a crop factor of 7.21, meaning it performs like a 30mm f/16 lens. So what does the iPhone shot look like when compared to the full frame and crop sensor shots?

Much greater depth of field! Seven times more, by the math. This is why it is so difficult to get that rich, buttery bokeh look with a phone, unless you use Apple’s fake bokeh in the new Portrait Mode.

So are smaller sensors just worthless?

Absolutely not. Typically, crop sensors are able to be manufactured at lower cost and, since they are smaller, the housing that surrounds them tend to use less material, also reducing cost and weight. Many of us got our start in photography using an entry-level camera with a crop sensor. And many people are flocking to companies like Fuji (APS-C), Panasonic and Olympus (MFT) for their incredibly small mirrorless cameras to save weight.

The bottom line here is we want to inform you all of the basic physics – not tell you what you should shoot with. The crop factor multiplier is an extremely useful tool for planning out the results of using a certain lens with a certain camera, compared to its full frame counterpart. And remember to use it on both the focal length and the aperture to fully realize the effect between different camera sensor sizes. 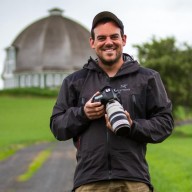 Scott Donschikowski is a professional photographer, speaker and instructor of photographic arts and digital darkroom techniques. He is an Adobe Certified Expert and has taught and lectured all over California. A tech geek at heart, when Scott is not out taking pictures he spends his time writing for numerous blogs, reviewing photography gear, and refining his digital darkroom craft. He is also an avid astrophotographer.

How to Visualize and Shoot in B&W